I’m going to bring together in a variety of posts (in no particular order and at random times) a very succinct summary of various aspects of the move towards online public services over the last couple of decades. This draws upon research we did at CTPR, along with personal engagement with some of these efforts, and discussions and debates with a whole host of people and organisations who have grappled with the problems and opportunities over the years. This first post isn’t intended to be comprehensive or definitive — it’s more of a quick 101 of work around a single online ‘portal’ or web presence for UK central government services for those not familiar with the story so far.

So it was nearly 20 years ago that open.gov.uk — the first UK online portal for government services — went live. 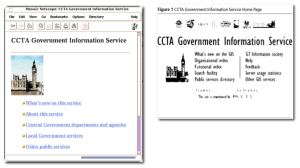 This was the work of the Central Computer and Telecommunications Agency (CCTA), reporting to the Cabinet Office. open.gov.uk acted as a sort of government single point of presence “launchpad” through this new “Government Information Service”, helping users navigate multiple department and agency sites. The CCTA also hosted websites for departments and agencies, aiming to persuade them to work in a collegiate way to provide a more integrated online presence.

In 1996, the ‘Government Direct’ green paper positioned itself as ‘a prospectus for the electronic delivery of government services’.

It promised to “… change fundamentally and for the better the way that government provides services to citizens and businesses … Services will be more accessible, more convenient, easier to use, quicker in response and less costly to the taxpayer.”

In 1998, the Parliamentary Office of Science and Technology (POST) conducted an extensive review of progress towards “Electronic Government”. It reported that the Government Information Service site had grown rapidly, but noted some conflicts between the desire for better, open data and the traditional pricing models of many agencies.

Amongst the many initiatives POST mention are the intelligent form (or iForm) pilot, for enabling notification of self employment through a single intelligent form that updated three separate government departments. It was also around this time the change of address demonstrator was busy being tested.

Then in 1999, the Portal Feasibility Study appeared.

Commissioned by CITU (the Central IT Unit in the Cabinet Office), this explored the feasibility of developing “Government Portals as a potential, single, integrated means of access to Government information and services. This will allow information from different sources within Government to be brought together at one point, allowing the creation of new “joined-up” services with a standardised presentation.”

In 1999, this was followed by the Modernising Government initiative, which included a commitment to develop a single electronic presence aimed at opening up a range of “one-stop-shop” services.

As a result, in December 2000, the GIS/open.gov.uk presence was replaced with the new UKonline citizen portal. 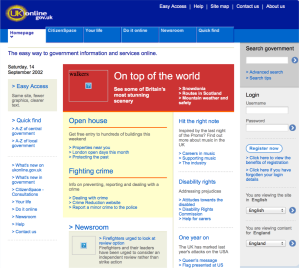 UKonline didn’t restrict itself solely to an online web presence, but also reached out to other digital channels — including television.

Rather than limit itself to replicating online versions of transactional paper forms, it also modelled what it called “life episodes” — which aimed to bring together a bundle of services based around events impacting citizens so they could be dealt with in a single place.

In November 2003, a sister government portal for businesses — ‘businesslink.gov.uk’ — was launched to provide access to information and services for businesses. 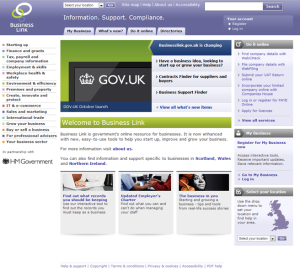 Then in March 2004, we see the first phase of the government’s next portal, ‘Directgov’, launched, revamping and replacing the earlier efforts in its memorable orange livery. 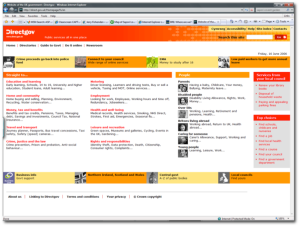 This was followed in 2010 by digital champion Martha Lane Fox’s review of government digital services entitled ‘Directgov 2010 and beyond: revolution not evolution’.  As a result, an initial prototype of a new site, named Alphagov, was launched in May 2011 and invited feedback as part of work building towards a replacement for both the Directgov and Businesslink sites. 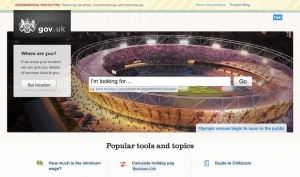 In August 2011, Alphagov moved into its beta phase, further refining and testing an all-encompassing single UK government presence. In October 2012, the site went fully live and operational as gov.uk, replacing both Directgov and BusinessLink.

Work is currently in progress to continue refining and improving the site, with a particular focus on the delivery of an initial 25 exemplar services to demonstrate the art of the possible.

I think the official 20th ‘birthday’ of the original open.gov.uk/GIS site will be in October of this year — but if anyone knows better or has a more specific date, comments are open below………..

Images from my personal collection (how sad), the National Archives, Wikipedia and http://alpha.gov.uk. Sorry, some of them are the best resolution I can find — if you have better ones and are happy to share, let me know.