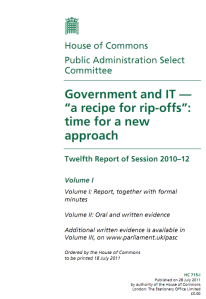 The House of Commons Public Administration Select Committee (PASC) has today published its report on Government and IT (PDF).

I had the privilege of working for the Committee as their Specialist Adviser for this inquiry. I hope the report will help bring about the beneficial outcomes I know many people desire – across Parliament (and all political parties and affiliations), the Government, Whitehall and the wider public sector, the supplier base, the media and, of course, for the general public whose essential public services lie at the very heart of this issue.

The report argues that the Government needs to take action in four primary areas in order to use IT more effectively in the design and operation of the UK’s public services:

However, I would suggest that rather than just walk away with these top-line items that the whole report is worthy of a read from front to back. And indeed the written and oral evidence (PDF), and additional written evidence (PDF), available online. The inquiry covered a wide range of evidence and the report makes a series of broader, interdependent recommendations – all of which need to be properly co-ordinated and managed if the desired improvements are to be achieved.

The report currently appears to be receiving a wide range of coverage, from the BBC and Sky to the Guardian,  Mirror, FT, through to Computer Weekly, ComputerWorldUK and numerous bloggers (such as the well-respected Tony Collins) and tweeters.

The importance to me lies less in the historic critique of what has failed – which has been covered various times before – and more in the Committee’s positive recommendations for change and improvement. The real test now will be to see how quickly and effectively its recommendations can be reviewed and, I hope, implemented – in order for all of us to benefit from the highly valuable role that I believe well-managed, policy-integrated IT can play in the design and operation of our public services.